This is a fabulous gift idea – the website Create The Night Sky allows customers to select the date of an important event in their life and create a poster of what the night sky looked like on that very night.

This is the night sky on the night I was married in the year 2000. These would make great gifts as we head into the holiday season.

At Laboratory5 Inc. We bring together all elements of STEAM and tie them up into a package to promote the work each individual is doing in their fields to celebrate this work. We produce experiences so that those unfamiliar with the glorious, quirky, nerdy qualities of all areas of STEAM can be explored as an adventure to explain these fields.

Laboratory5 Inc. is a small business based in Tempe, Arizona

Celebrating Summer Solstice is a great way to connect kids with nature as Solstice highlights the transitions in nature. Crops are starting to grow, daylight is at its peak and the weather in most locations is inviting.

June Solstice: Longest and Shortest Day of the Year

A solstice happens when the sun’s zenith is at its furthest point from the equator. On the June solstice, it reaches its northernmost point and the Earth’s North Pole tilts directly towards the sun, at about 23.4 degrees. It’s also known as the northern solstice because it occurs when the sun is directly over the Tropic of Cancer in the Northern Hemisphere.

‘Solstice’ (Latin: ‘solstitium’) means ‘sun-stopping’. The point on the horizon where the sun appears to rise and set, stops and reverses direction after this day. On the solstice, the sun does not rise precisely in the east, but rises to the north of east and sets to the north of west, meaning it’s visible in the sky for a longer period of time.

Although the June solstice marks the first day of astronomical summer, it’s more common to use meteorological definitions of seasons, making the solstice midsummer.

Ideas to celebrate the MidSummer Solstice:

Pick fresh flowers  – Swedish legend has it that if you pick seven kinds of flowers and put them under your pillow on Midsummer Eve, you will have wonderful dreams.

Have a Bonfire – According to old pagan traditions, the bonfires would to scare off witches and other evil creatures during the Solstice.

Learn more about Phenology – the study of cyclic and seasonal natural phenomena, especially in relation to climate and plant and animal life.

Just in time for the holidays, Viralnova has shared some fabulous drinks for all you science geeks! 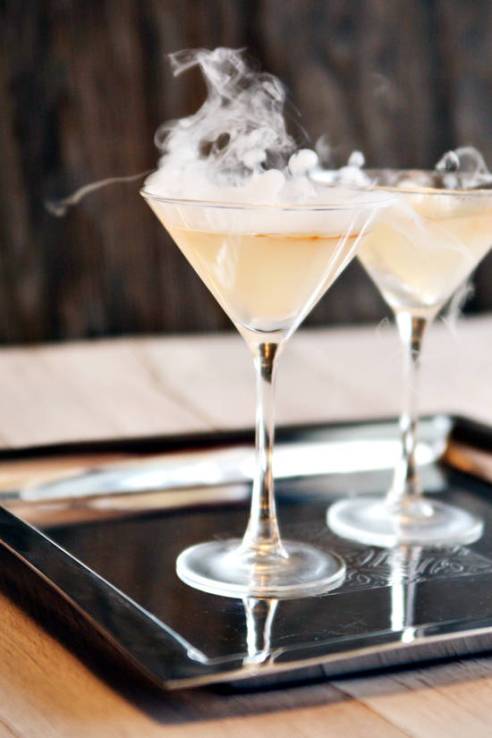 Shown above, the La Llorona Martini is made with Pisco Brandy, lemon and lime juice and dry ice.  Shown below is a drink called Alien Brain Hemorrhage.  It is made by layering Irish Cream over peppermint schnapps and grenadine.

Check out a full list of “Molecular Mixology” and their recipes on Viralnova.

Laboratory5 Inc. is a small business based in Tempe, Arizona