People are real, but the crowd disappoints

a thought by Seth Godin 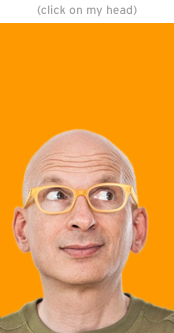 Every crowd, sooner or later, will let you down.

The crowd contains a shoplifter, or a heckler, or an anonymous boor who leaves a snarky comment.

The crowd loses interest, the crowd denigrates the work, the crowd isn’t serious.

Worst of all, sometimes the crowd turns into a mob, out of control and bloodthirsty.

But people, people are real.

People will look you in the eye.

People will keep their promises. People can grow, can change, can be generous.

When in doubt, ignore the crowd (and forgive them). When possible, look for people instead.

Scale is overrated, again and again.

A few modeling poses of Mr Otis in his new sweater.