As mentioned in a previous post the in-laws were in from Chicago and one of the nights we cooked in they brought over a loaf of french bread. I noticed it was turning a bit stale by last night and I hated to waste it so I thought I would whip up a pan of baked french toast. I’ve seen this on brunch menus but have never made it. Seemed easy enough! I put the bread slices down in what is fast becoming my favorite pan. It is a Vintage FINEL Enamel Finland orange baking dish. I don’t really see these pans online much but they can be found in thrift stores. Anyway back to the french toast. I whisked together eggs, milk, cinnamon, nutmeg and vanilla, poured that on top of the bread and then I threw on some slivered almond for visual flare. Finally, I stuck it in the refrigerator, covered over night. Woke up this am to my favorite show – CBS Sunday morning and popped the goods into the oven for 30 minutes. It was heavenly! Never shall old bread go to waste in my house again. MMMMMMMM . . . . . 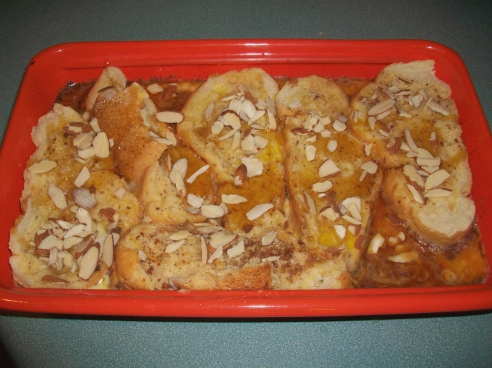 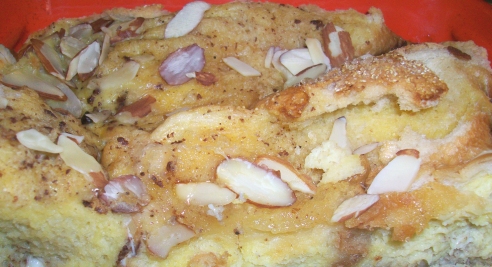 Next morning out of the oven